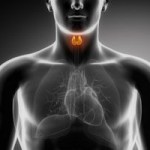 Thyroid dysfunction affects approximately 12% of the US population and up to 30% of the world population, especially in iodine deficient regions. According to the American Thyroid Association, women are eight times more likely to have thyroid disease than men and up to 60% of those with thyroid disease may be undiagnosed. The thyroid gland, located in base of the neck, produces two primary hormones thyroxine (T4) and triiodothyronine (T3) that travel throughout the body and bind to thyroid receptors that then control a myriad of physiological processes including temperature regulation, skeletal muscle, fat metabolism and cardiovascular function. Thyroid hormones also impact brain function and are linked to a range of neuropsychological functions including cognition, depression, anxiety and even psychosis.

The thyroid hormones are controlled from a region in the brain about the size of an almond called the hypothalamus. The hypothalamus is the master regulator for all hormone systems and hormone related activity including feeding, sleeping, reproduction, fight, flight, energy usage basically every aspect of human and animal survival. It sits at the interface between the central nervous system functioning and the endocrine system functioning.

To regulate thyroid function, the hypothalamus releases a hormone called thyrotropin releasing hormone (TRH), which signals the pituitary gland to release thyroid stimulating hormone (TSH). TSH then activates the thyroid gland to produce and release thyroxine or T4. If all is well, T4 is converted to T3, which then binds to thyroid receptors located throughout the body and thyroid modulated functions are regulated appropriately. Too much or not enough circulating thyroid hormones, because of their broad reaching effects can, and often do, destabilize homeostatic balance throughout the body.

Thyroid hormones have a profound effect on cardiovascular function. Hyperthyroidism evokes heart palpitations, tachycardia, and high blood pressure. While hypothyroidism, elicits bradycardia and low blood pressure consistent with its slowing of metabolism in general. These effects were believed to be mediated solely through the thyroid hormone thyroid receptor complex on the heart itself. New research shows that there may be an additional, more direct route for thyroid control of cardiovascular function the brains autonomic system.

Researchers have identified a new set neurons in the anterior hypothalamus that suggest a site for central nervous system autonomic control of thyroid mediated cardiovascular function. That is, these neurons directly control heart rate and blood pressure.

For over 50 years, researchers have known that lesions to this region of the hypothalamus cause heart rate and blood pressure to skyrocket. Conversely, stimulation causes heart rate and blood pressure to drop. What they didnt know is how neurons in the anterior hypothalamus controlled cardiovascular function. It turns out, there are thyroid receptors in a set of nuclei called the parvalbuminergic neurons that directly control cardiovascular function. Mutations that specifically affect those thyroid receptors in the parvalbumiergic neurons have drastic affects on heart rate, blood pressure and thermosensation the ability to sense temperature change and regulate the bodys response accordingly.

In the present study, mutations to the thyroid receptors located on the parvalbumiergic neurons in the anterior hypothalamus directly altered cardiovascular function, suggesting direct and specific autonomic control of cardiovascular function. The mutation to these thyroid receptors evoked high blood pressure and elevated heart rate in conjunction with thermosensation and in states of hypothyroidism. That is, temperature change evoked the cardiovascular effects. When animals with the defunct thyroid receptor in the anterior hypothalamus were exposed to cold, heart rate and blood pressure skyrocketed. In conditions where the ambient temperature was normal, only minimal tachycardia was observed. Since hypothyroid patients have difficulty maintaining core body heat, finding an association between cold exposure and impaired cardiovascular functioning, was particularly interesting.